Lecturer, University of Colorado, Denver, College of Arts and Media

The Solar Wind Harp (http://www.solarwindharp.com) is a data driven audiovisual performance system artwork. It collects solar wind data in real-time, sonifying and visualizing the electromagnetic pulse of the Sun before that pulse reaches Earth. Derived from the next generation of early warning systems commissioned by the US science agencies NASA and NOAA – the DSCOVR Solar Wind Harp is part performance instrument, part time machine, and a critical investigation into the phenomenological synapse that separates all scientific inquiry from experiential authenticity.This synapse, or gap, forms the conceptual basis of the project, pointing out the subtle disconnect between observation and experience on the one hand, and measurement and interpretation on the other.

The hybrid performative system is a software artwork that both enacts the data that it sources from the satellite hardware, and simultaneously represents itself as a complex and ultimately manipulated set of outcomes. As data streams into the system, we actively and artistically perform and control, improvise and cajole. Interpretation is foregrounded and transcoded into new experience, a feedback loop of causality, perception and representation.

With this artwork we explore the speculative relationships between aesthetic and functional mappings of data extracted from quantitatively robust sources as sites of potential meaning and possible interfaces between disciplines. The Solar Wind Harp demonstrates, and questions, how mappings work, not only within the hardware of DSCOVR, but between a large spectrum of available scientific data and artistic explorations.

Artist David Fodel developed the software component of the artwork, with NOAA scientist Dr. George Millward acting as science consultant. With the launch of DSCOVR in 2015, the project’s artistic software will couple with the real-time telemetry of the DSCOVR satellite hardware. DSCOVR, the Deep Space Climate Observatory, will provide instantaneous measurements of the solar wind magnetic field, and the solar wind plasma ion velocity and density. From its position upstream of the Earth, at the L1 Lagrangian point, these measurements provide warnings of incoming space weather events 15 to 60 minutes before they impact Earth.

The DSCOVR Solar Wind Harp project builds upon previous versions of the software using data collected from the existing NOAA/NASA ACE (Advanced Composition Explorer) satellite – developed by us in 2008 and exhibited and performed in venues such as the Denver Museum of Nature and Science, Anderson Ranch Art Center, and The Phillip J. Steele Gallery among others.

With these data understood, we constructed the Solar Wind Harp to reflect and represent in poetic and formal ways the dynamics of the phenomena as we imagine them – the subtle yet spectacular scale inherent in the system, and the discrete gaps that exist as this system generates and propagates its signals, flows and signs through various interpretive agents.

Our software assigns each element in the data, transmitted once every second from DSCOVER, to a value in a matrix of modulators in a physical modeling sound synthesis engine built from freely available programming tools. The synthesis engine models a hybrid string/wind instrument, in keeping with the theme of the wind harp — a stringed box placed on a window sill that produces shifting droning tones as the wind blows across the strings. Further, the relative values of speed and temperature are used to produce pitches that can be extracted and forwarded on to external instruments in a performance setting.

Additional data streaming from DSCOVER at 50hz are used to synthesize imagery at 30fps, and populate buffers for use in a granular synthesis engine. This is a significant change from previous versions and allows for a more dynamic and expressive instrumental quality in the software.

Within the software a number of scaling operations occur to create ramps between incoming values over time, to simulate the continuous nature of the phenomena as we imagine it, and to avoid the distinct and noticeable value changes inherent in a system with a 1 sec. sampling rate. While avoiding these distinct value changes in one section of the instrument, we foreground them in another, as a way to make transparent the apparatus of the system itself. The pitch extraction system creates distinct values, snapshots of conditions, which punctuate the otherwise continuous drones, signifying the interpretive breaks and gaps in the generative chain of events.

The video engine is similarly fueled using the Interplanetary Magnetic Field (IMF) vector data as generators of optical flow vectors, and proton density values as seeds for particle systems. Additionally, the actual synthesized sound and imagery feed back on one another through user-selected and modulated channels in a live performance setting, creating unpredictable and expressive results.

As an instrument the Solar Wind Harp provides a single performer, or ensemble, a set of conditions and audiovisual ‘seeds’ which the performers may further manipulate using additional sound and image tools. The instrument determines the structure and material of the audiovisual content, typically dividing it into three distinct ‘movements,’ each driven by different sets of data: real-time satellite stream; historical recorded data from a solar maximum (a time when the Sun is at its highest activity); and calibration data from when the satellite is first configured and tested. These distinct movements provide for a great deal of dynamics in the sound and imagery, and offer glimpses into the conditions that generate the data. Examples of two different configurations of the ACE Solar Wind Harp can be found here: https://vimeo.com/87818519 and https://vimeo.com/29043416.

A gap separates interpretation and experience – in this case, an actual synapse. This rift in both time and space has existed since our brains first shot sparks from one neuronal gob to another. The activity of these nodes and the nodes themselves are virtually inseparable, even as we subdivide them into hardware and software.

On a macrocosmic scale stellar bodies and their planetary kin share similar synaptic clefts, reaching out to one another with pulses of electromagnetic energy, sending signals across a gap, a synapse of massive proportions. Situated somewhere in between we have constructed sensors, satellites and beacons, which project interpreted experience forward in both time and space in an effort to know what is coming.

DSCOVR with its predictive software attempts to close and invert this gap by providing actionable interpretations of the data before the actual experience of the phenomena reaches us. 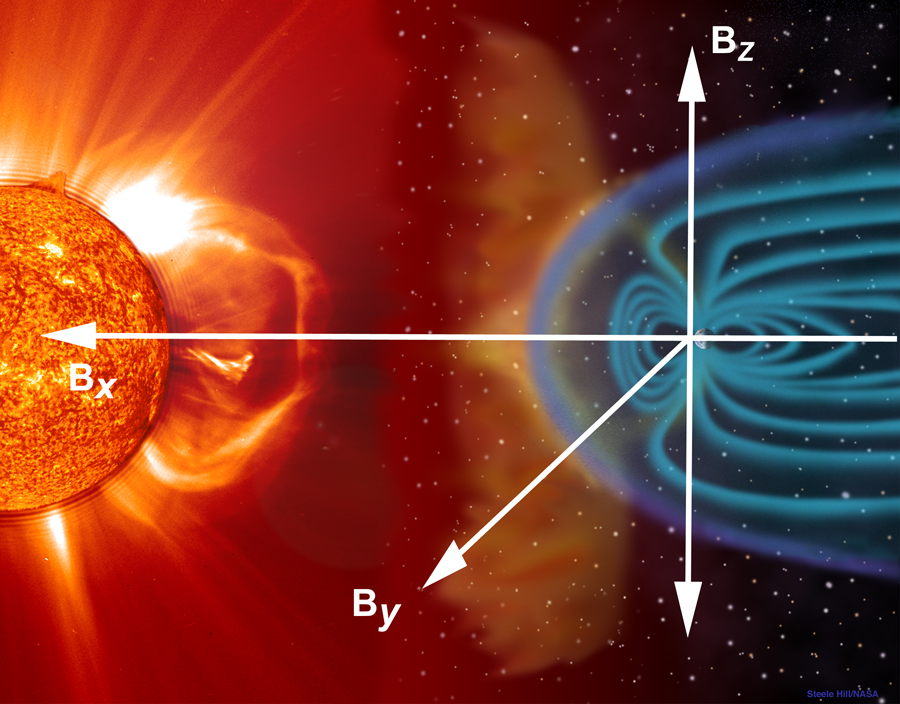 The work suggests that one imagines the Sun as a node in a celestial network, or a neuron in a cosmic brain, and its ongoing activities of fusion, expulsion of gases and radiation as something of a process of communication, an elemental and energetic language broadcasting across the great expanses of space, like an enormous synaptic cleft. The Earth is another node in this cosmic neuronal network, absorbing the cascade of matter and energy, ‘listening’ to the Sun and ‘reacting’ accordingly, its terrestrial environment and atmosphere responding and shifting on various levels from the material to the electromagnetic.

Across this vast cleft, signals travel. Into this cleft we’ve placed an intermediary —DSCOVER, an interlocutor, a technological instrument lying a million miles upstream, measuring the ebb and flow of solar winds on which messages are blown, transforming signal into sign. DSCOVER detects, measures and beams these messages back to us, intercepting and accelerating the signal flow to beat the wind to its distant destination.

The Solar Wind Harp remixes the scientific instrument into musical instrument, into an audiovisual instrument that simultaneously remaps solar radiation intensities, vectors and densities into point clouds and radians, grains and bins, matrices and modulators, oscillations and harmonics.

The Solar Wind Harp is an important collaborative effort that explores the possibilities and the pitfalls of data driven artworks.

Mappings of data are an important part of the work not only in the execution of the work (i.e. what bit of data causes what effect), but also in how they create a connection (or gap) between the phenomena that occurs, and the subtle manipulations that occur between that moment and the moment of its interpretation, and subsequent representation.

This project frames natural phenomena operating on a cosmic scale in terms of potential communication processes through which we are able to re-contextualize our place both on and beyond the globe. The work seeks to architect a new sense of place, real as well as imaginary, that acknowledges the frequently unheard and invisible effects on human experience and understanding. In addition to the specific results and potential applications of the software itself, we hope that this investigation might yield new models of public science, art and technology interactions from creative, industrial, and institutional perspectives.

David Fodel is an educator, curator and artist whose recent work concerns itself with reading and writing traces of systems and processes, technological and otherwise, that are overlooked, invisible, and mute in an attempt to animate and actualize those potential languages. His eclectic installations, live performances, award-winning sound design and video works have been exhibited, screened, and performed internationally including Festival ECUA-UIO, Quito, Ecuador; Future Places Festival, Porto, Portugal; Transmediale, Berlin, Germany, and the International Symposium on Electronic Art. His work has been written about in Wired Magazine, and published by the Experimental Television Center, and Sekans Cinema Journal. Fodel was selected in 2013 by the National Center for Contemporary Art in Moscow for a research residency to study the DIY electronics and live cinema scene there. He teaches Live Media, Creative Computation, and Interdisciplinary Practices at the University of Colorado, Denver and co-curates the MediaLive Festival.

Dr. George Millward is a research scientist working at the University of Colorado, Boulder and visiting scientist at the National Oceanic and Atmospheric Administration (NOAA) Space Weather Prediction Center (SWPC). He is currently working on projects to transition space weather computer models from academia into full operations at the National Weather Service. The models provide advanced warning of space weather phenomena such as solar Coronal Mass Ejections, which can adversely affect technological systems such as communications satellites, GPS and electric power grids.
Originally from the United Kingdom, Dr. Millward studied physics at the University of London and earned his doctorate from the University of Sheffield for computational modeling studies of the Earth’s upper atmosphere. He is also a sound artist and musician with an interest in technological sound and music, and has been involved in a number of collaborative art projects that draw upon novel interpretations of scientific data and applications.